Lush Prize announced its 2020 shortlist on January 6th.  Among the projects shortlisted were:

- a team from Brunel University in London working on organ-on-a-chip platforms using human cells to replicate female organs (vagina, ovaries, placenta and breast) to better understand the causes and treatment of women’s diseases.

- a Swiss start-up company called AlveoliX who have created a lung-on-a-chip with a moving ‘microdiaphragm’ connected to a soft porous membrane where human cells are cultured.

Both these projects were thought to offer promising routes to replace the use of animals in chemical safety testing with more human-relevant scientific data.  In total, 58 projects from 21 countries were shortlisted for the £250,000 prize fund. The full shortlist is available on the Lush Prize website at www.lushprize.org.

For the first time this year, Lush Prize were pleased to announce that the shortlist contained a group from Turkey, where awareness-raising of animal welfare issues is just beginning to take off.  As before, it also contained nominations from as far afield as China, New Zealand, Chile and Slovakia.

We have reproduced the full 2020 shortlist for the Science Prize below.  Computational toxicology projects were most frequently shortlisted in this category, with six of the 14 shortlisted groups working in this area.  This will partly be a consequence of Lush Prize altering its criteria in 2019 to focus on computational solutions, and may be a consequence of an upsurge in interest in this area too.

The next most frequently shortlisted projects were organs-on-chips, where four projects made it through to the final cut, including the two mentioned above.  The Science Prize winner in 2018 was the blinking eye-on-a-chip from the BIOLines Research Group at the University of Pennsylvania.

The winners of the 2020 Lush Prize will be chosen by an expert panel of judges on January 24th in London but will not be publicly announced until the Lush Prize Awards Ceremony in May. 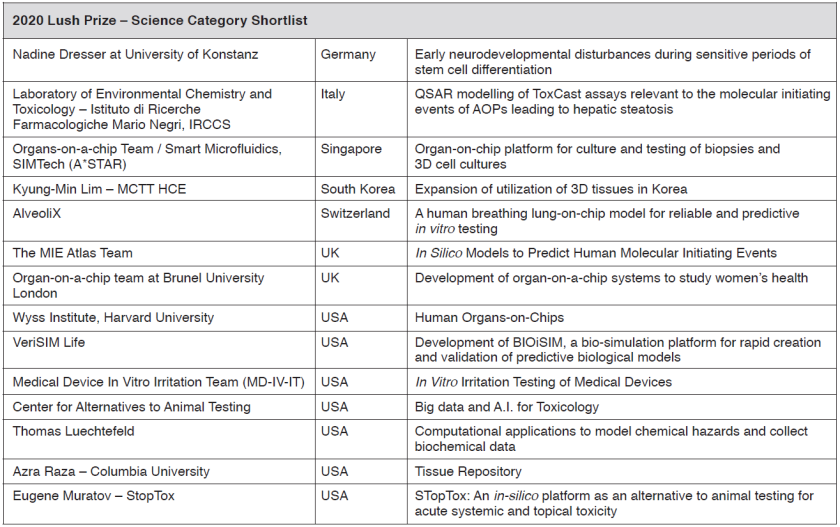