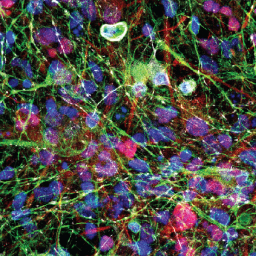 Using immunofluorescent staining and multi-well micro-electrode arrays, we show that all models develop functional neuronal networks that exhibit spontaneous activity and (network) bursting behavior. Development of activity patterns differed between the models, probably due to differences in model composition and seeding density. Neuronal activity and (network) bursting was reproducibly modulated with the seizurogenic compounds strychnine, picrotoxin (PTX) and 4-aminopyridine (4-AP). However, the sensitivity and degree of chemical-induced effects differed between the models, which can likely be explained by differences in seeding density, maturation and different ratios of inhibitory and excit­atory cell types. Importantly, compared to rat primary cortical neurons, the hiPSC-derived neuronal models were equally, or even better in the case of 4-AP, suited to detect seizurogenicity. Overall, our data indicate that hiPSC-derived neuronal models may be used as a first screening tool for in vitro seizure liability assessment. However, before hiPSC-derived neu­ronal models can fully replace animal experiments, more compounds should be tested and the available models must be further characterized to fully understand their applicability.