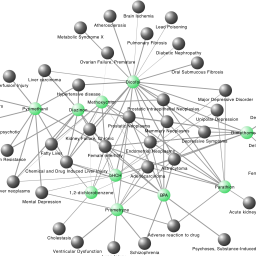 Exposure to persistent organic pollutants (POPs), as defined by the Stockholm Convention, may alter biological systems and cause toxic effects. Computational studies appear to be a relevant approach to increase our understanding of the molecular mechanisms triggered by POPs. We investigated the use of a systems toxicology approach to explore the effects of POPs on human health. A protein-protein association network (PPAN) was developed based on known POP-protein interactions. This model was used to predict protein complexes for several candidate POPs, including dicofol, methoxychlor, and perfluorooctanoic acid (PFOA), that are listed or proposed to be listed as POPs by the Stockholm Convention. Integration of multiple data sources (pathways, disease annotations, adverse outcome pathways) involving the identified protein complexes was performed independently in order to reveal putative risk factors for human health. This approach revealed that several systems may be disturbed by these candidate POPs, mainly the reproductive, metabolic and nervous systems.
This study highlights that a computational systems toxicology approach may help to decipher putative biological mecha­nisms of poorly studied chemicals and link them to possible adverse effects with the aim to support regulatory assessment and trigger new epidemiological and experimental studies. In order to develop more accurate computational models as alternative methods to animal testing, the next challenge will be to integrate more data according to the findable, acces­sible, interoperable and reusable (FAIR) data principles.