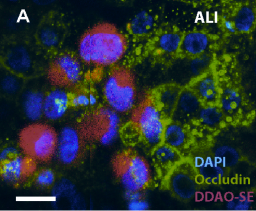 The air-blood barrier is mainly composed of alveolar epithelial cells and macrophages. Whereas the epithelium acts as a diffusional barrier, macrophages represent an immunological barrier, in particular for larger molecules and nanoparticles.

The co-culture was characterized regarding cellular morphology, viability and barrier function. Macrophages were homogenously distributed on the epithelium and could be kept in co-culture for up to 7 days. Transmission electron microscopy showed loose contact between THP-1 and hAELVi cells. When grown at air liquid interface, both cells were covered with extracellular matrix-like structure, which was absent in THP-1 mono‑culture. In co-culture with macrophages, hAELVi cells displayed similar, sometimes even higher, trans-epithelial electrical resistance than in mono-cultures. When exposed to silver and starch NPs, hAELVi mono-cultures were more tolerant to the particles than THP-1 mono-cultures. The viability in the co-culture was similar to that of hAELVi monocultures. Transport studies with sodium fluorescein in presence/absence of EDTA proved that the co‑culture acts as functional diffusion barrier. These data demonstrate that hAELVi-/THP-1 co-cultures represent a promising model for safety and permeability studies of inhaled chemicals, drugs and nanoparticles.