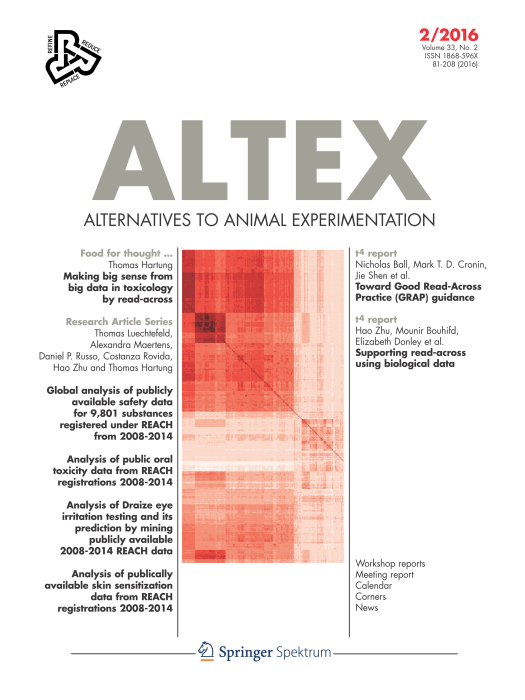 The European Chemicals Agency, ECHA, made available a total of 13,832 oral toxicity studies for 8,568 substances up to December 2014. 75% of studies were from the retired OECD Test Guideline 401 (11% TG 420, 11% TG 423 and 1.5% TG 425). Concordance across guidelines, evaluated by comparing LD50 values ≥ 2,000 or < 2,000 mg/ kg bodyweight from chemicals tested multiple times between different guidelines, was at least 75% and for their own repetition more than 90%.
In 2009, Bulgheroni et al. created a simple model for predicting acute oral toxicity using no observed adverse effect levels (NOAEL) from 28-day repeated dose toxicity studies in rats. This was reproduced here for 1,625 substances. In 2014, Taylor et al. suggested no added value of the 90-day repeated dose oral toxicity test given the availability of a low 28-day study with some constraints. We confirm that the 28-day NOAEL is predictive (albeit imperfectly) of 90-day NOAELs, however, the suggested constraints did not affect predictivity.
1,059 substances with acute oral toxicity data (268 positives, 791 negatives, all Klimisch score 1) were used for modeling: The Chemical Development Kit was used to generate 27 molecular descriptors and a similarity-informed multilayer perceptron showing 71% sensitivity and 72% specificity. Additionally, the k-nearest neighbors (KNN) algo­rithm indicated that similarity-based approaches alone may be poor predictors of acute oral toxicity, but can be used to inform the multilayer perceptron model, where this was the feature with the highest information value.