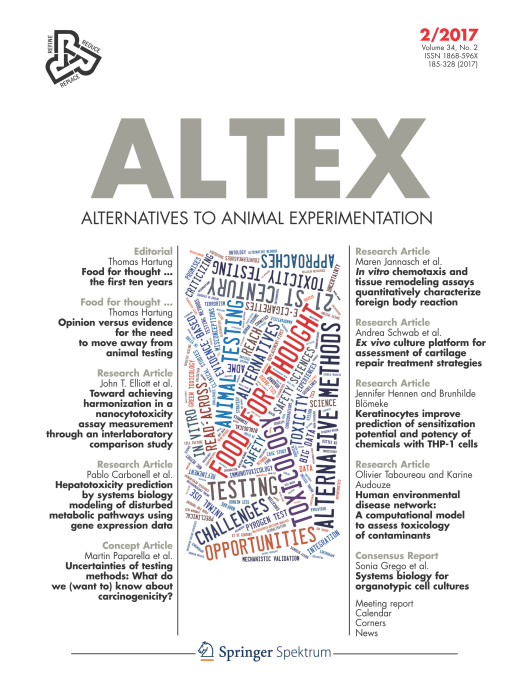 In vitro approaches to address key steps of chemical-induced skin sensitization have been developed, but there is uncertainty how keratinocytes, which play a crucial role not only regarding xenobiotic metabolism but also skin inflammation, impact on a chemical’s potential and potency to activate dendritic cells. We investigated these aspects by coculturing THP-1 cells, as surrogate dendritic cells, with HaCaT keratinocytes. We tested our HaCaT/THP-1 model with a set of 14 sensitizers, containing 7 prohaptens, and 10 non-sensitizers. Compared to exposing THP-1 alone, coculturing resulted in up to 3.1-fold enhanced maximal CD86 and/or CD54 upregulation on THP-1, and improved concentration-dependency. All 14 sensitizers were found positive for CD86 and/or CD54 upregulation based on Δ mean fluorescence intensity (MFI) ≥ 10 for CD86 and ΔMFI ≥ 50 for CD54. Only 1 of 10 non-sensitizers was false-positive. Remarkably, coculture with HaCaT keratinocytes improved the rank correlation of the estimated minimum chemical concentrations inducing a positive response in vitro with in vivo data on sensitization potency, especially for CD54 (Spearman: r = 0.739, p = 0.006; CD86: r = 0.571, p = 0.041). These promising data suggest that the coculture model has the potential to support the prediction of sensitization potency based on in vitro data.