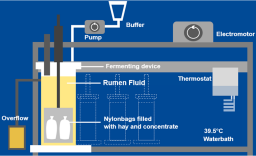 The approval of plant protection agents requires xenobiotic metabolism and residue studies in rats, farm animals and plants (e.g., EU regulation 1107/2009) performed according to OECD guidelines. The intestinal metabolism of ruminants can produce specific residues, which must be investigated in detail. This is usually done by performing additional in vivo studies. The aim of the present work is to assess whether a modified in vitro rumen simulation system (RUSITEC) can generate this information. Rumen constituents from sheep were incubated over 8 days. The pH (6.70 ± 0.07), the redox potential (301 mV ± 30 mV), the microbial composition, and β-glucosidase activity were monitored. After an equilibration period of four or five days the fermenters were probed with 14C-labelled triazole derivatives, i.e., common metabolites of azole fungicides. Only triazole-alanine was cleaved to 1,2,4-triazole, while triazole-acetic acid and triazole-lactic acid remained stable for up to 96 hours. The two glucosides octyl-β-D-glucopy­ranoside and polydatin, which are common residues found in plants, were both rapidly cleaved in the in vitro rumen system. The data shows that the modified RUSITEC system is stable, viable and maintains metabolic capacity over a longer period of time (at least 8 days). This makes many animal experiments obsolete and represents a significant contribution to the 3Rs (refine, reduce, replace). The modification of the RUSITEC system enables safe use of unlabeled but also of radiolabeled test compounds.